Without fungi, there would be no life on Earth. Totaling around 100,000 species, these organisms play a vital role in recycling animal and plant matter, but can also be deadly
parasites.

Their spores are found practically everywhere.

1. Most fungi are microscopic tangles of threads that spread through wood and soil with no
distinct shape. Just one gram of soil can contain 328 ft (100 m) of these minuscule threads. Mushrooms are the "fruiting bodies" of a fungus—they release spores so the fungus can reproduce.

3. Some mushrooms can spread their own spores, but others need a little help. The foul smell of the devil's fingers fungus entices flies that unwittingly scatter its spores to new locations.

4. When Scottish scientist Alexander Fleming accidentally let fungus grow on a dish of bacteria in 1929, he made one of the greatest discoveries of all time. The fungus
produced penicillin, which became the first lifesaving antibiotic drug.

5. Truffles are one of several fungi considered a delicacy. Found underground, pigs' and dogs' sensitive noses can sniff them out. White truffles are the most expensive, selling for up to $6,600 per pound.

6. Fungi feed in an unusual way—by living inside their food. Their threads pass through animal and plant matter, where they release chemicals to break the food down, so the fungus can absorb the nutrients.

7. You may think a cheetah is a speedy sprinter, but the tiny hat-thrower fungus can accelerate faster. To release its spores, it throws a “hat” (a spore capsule), which accelerates more than twice as fast as a speeding bullet.

8. One of the most widely recognized fungi, the fly agaric's bright red-and-white cap warns of its poisonous nature. In folklore, this mushroom was often associated with fairies.

9.Fungi are not just found outdoors, but are everywhere in our homes.The pillow you lay your head on at night may host over 1 million fungal spores.

10. The yeast that gives bread its light, fluffy texture is a type of fungus. As yeast makes its food, it releases carbon dioxide, causing the bread to bubble up and rise when baked. 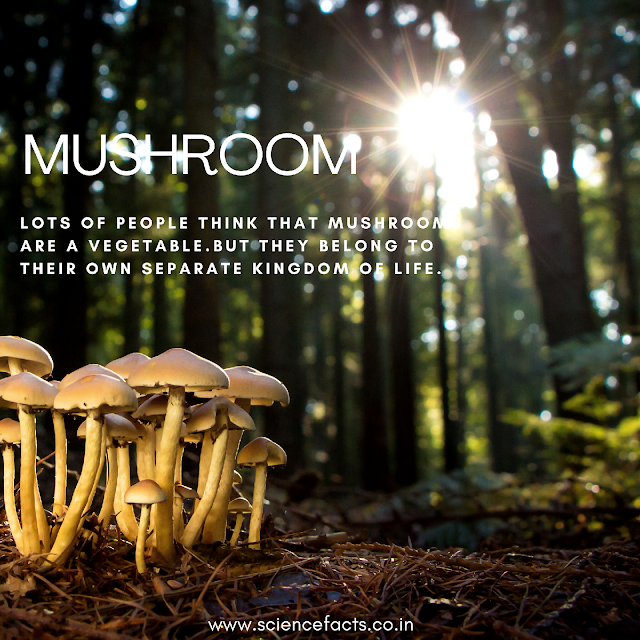 11. Lots of people think that mushrooms are a vegetable. They may be found near the carrots in the supermarket, but they belong to their own separate kingdom of life. What's more, fungi are biologically closer to animals than they are to plants.

When a mushroom is ready to reproduce, it produces spores in a tissue below its cap, which are released into the air. Spores must land in a suitable place, such as on soil or a plant, before they are able to germinate. They then begin to grow, producing a network of underground threads called mycelium. These threads eventually spread toward the surface and form a new mushroom, and the cycle begins again.

12. The fuzzy growth on a moldy piece of fruit is a type of fungus
although not the kind you'd want to eat. Some are edible the blue veinlike patterns in some cheeses are fungi related to those that make penicillin.

13. Most fungal spores cannot be
seen by the naked eye. However, the Giant Puffball—a mushroom that can grow up to the size of a soccer ball—throws up 7 trillion spores into the air in clearly visible clouds.